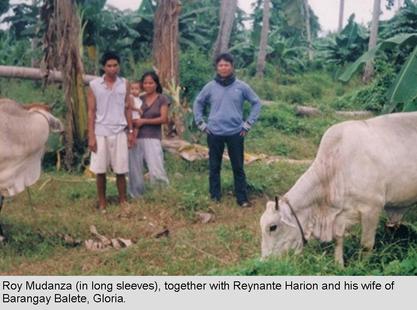 Sometime in September 1990 Roy Mudanza married a beautiful barrio lass from Barangay Pag-Asa, Bansud, Oriental Mindoro, while performing the task as team leader of a commando team of the Philippine Constabulary - integrated National Police (PC-INP) that conducted tactical operations against the New People’s Army (NPA) rebels, whose presence was highly felt in the hilly and mountainous areas of the island.

Due to his frequent exposure to the various places and communities of the province, including that of the indigenous people the Mangyans, he realized that poverty Is one of the principal reason why people in the hinterlands are drawn to the clutches of the NPA rebels.

This realization was much highlighted in some Barangays of Bansud and Gloria that Mudanza has been acquainted with proximity on these realities is confirmed by his newly-established family and their parochial kins.

On the following year as a second class constable of the defunct Philippine Constabulary with a meager salary of five thousand pesos (Php 5,000.00) a month, he decided to save some amount from his and his wife’s salary as a school teacher, to raise an amount to buy a matured cow, as an Initial stock for the cattle dispersal project he intends to start in Barangay Pag-asa.

Thus, in February 1995, the amount of eight thousand pesos (Php 8,000.00) was accumulated to buy a partner female cattle. They entrusted this cattle livestock to a family acquaintance, Tarsi Abanico, a jobless family man with seven (7) children subsisting on irregular means of income. 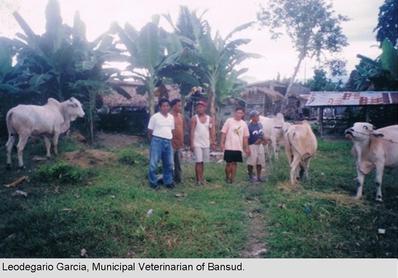 Within the first three (3) years of domesticating these cows, several calves were raised and out of which Mudanza was able to sell the bull In order to give the share of the caretaker for his labor. The female ones (heifers) were then entrusted to other caretakers coming mostly from the family circle of Tarsi who were also odd-jobbers in the community.

Meanwhile, the original caretaker continued to pasture for a pair of cows and became Mudanza’s trusted man when appraising the collies to be sold or those they intend to buy as added cattle stocks. Thus, the income of Tarsi increased not only from his share of domesticating the cows and its calves but also from his sideline occupations.

After several more years the son of Tarsi who was also one of the cattle caretakers decided to try his luck to be an overseas Filipino Worker (OFW) In Italy. His travel was facilitated mainly by their family’s income from the sale of collies they have pastured. 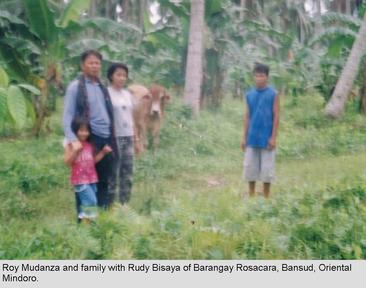 For the other caretakers, one was able to send their children to high school and a vocational institution in Bansud while the rest of them were assured of a steady source of income for food, clothing, medicine and some amount for the repairs of their homes. Then a decade after, Roy Mudanza and his wife finally realized that their simple efforts in 1995 resulted into an “informal cattle dispersal program” benefiting almost a dozen families and their dependents.

Thereafter, they made-up their mind to expand the coverage of the project to the two barangays of an adjacent town, Gloria and to another three (3) barangay of Bansud. The said project now has a total of fifty (50) cattles, fourty eight of which are females.

All along these socio-economic and entrepreneurial undertaking had succeeded based solely on simple plan and desire to help others thru trust and confidence and equitable sharing of gains molding the partnership into strategic prospective. 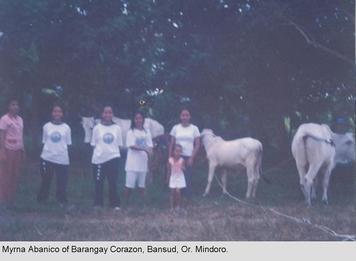 This is an innovation from the usual practice of giving the first offspring to the caretaker while the second goes to the owner of the cow and so forth as the number of offspring increases. The caretaker in this scheme has no share in the original stock except in money equivalent of the weight gained by the cow if ever it is sold. In case also of an accident that will impair the cattle or result in death, the caretaker is liable to replace the said cattle. But in this simple arrangement, in any event of an accidental impairment or impending death, it is immediately slaughtered and the caretaker will have his o her share of the meat while in case of loss due to cattle rustling, the caretaker will have no liability whatsoever.

Aside from cattle, the Roy Mudanza and his wife also embarked on goat dispersal, however it is still on its limited scale. 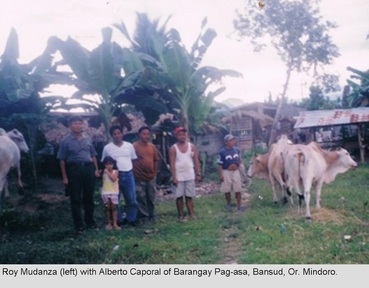 In totality, this animal dispersal program of Mudanza and his wife does not only benefit his family and those of the caretakers financially but also assists Mudanza’s security indirectly as a police officer endeavoring in such productiveness, unlike others who squeeze out from the labor of these underprivileged people.

Along this horizon, some crimes against persons or properties are deterred. The families and other dependents of the cattle caretakers would have no reason to engage in some form of petty thievery or other criminal acts because they are assured of a modest earning that may answer some of their basic expenses for food, shelter, medicine and education.