Alongside of Roy Mudanza's belief to the pursuance of better social order and development, the praxis of mainstreaming the foundations of civic virtues into its highly challenging fortitude to civility as the ethical base of the rule of law, serves as the challenging catalyst of his personality, driving him to explore further into the Interweaving net of socio-cultural, socio economic and socio-political  activities of his personal and professional life.

Resettlement Area for One Hundred (100) Aetas 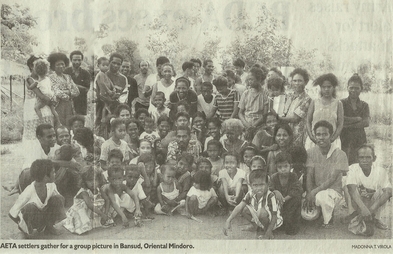 True to his commitment to public Interest with justness and sincerity, Roy Mudanza initiated the launching of a resettlement area for one hundred 100 Aetas, in Barangay Pag-asa, Bansud,  Oriental Mindoro.

In an article on the Philippine Daily Inquirer, “Aeta seek better life in Mindoro” by Madonna Virola on August 17, 2006 (page Al5), Mudanza was the “well-meaning lawman” who in 1993 met a group of more than ten (10) Aeta people along a river in Pinamalayan town and casually told them “come to Bansud for land so they don’t wander around “using his scribbled name and address”.

Mudanza was “surprised one day to see five (5) from the group he had met “were already at his doorstep. So, he referred them to the barangay chairman, who guided them to a cogonal parcel of land that had been covered by the government’s COMPREHENSIVE AGRARIAN REFORM PROGRAM and subsequently foreclosed by a bank. From these 30 Aeta families who came from Cavite, Laguna, Quezon, Negros, Iloilo and parts of Bicol and Mindoro emerged the first settlers nearby the riverbank. Then a few non-Aeta families and CARP beneficiaries also arrived to make use of the more than 400 hectares of uncultivated land. 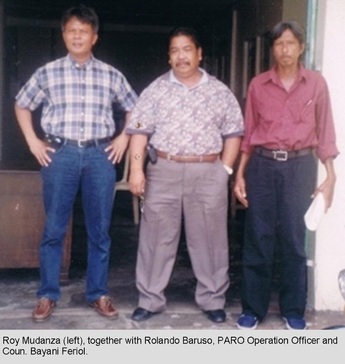 Their ordeal on this so-called “resettlement” area was no smooth sailing as they related their hardships to the nominee whom with diligence assisted them to overcome practical problems like food and shelter and at one instance sometime in 2005, “outsiders” with selfish motives burned the house nearby of one 78 year old Maria Barion, causing fear amongst them. Before this, the portion that the Aetas were cultivating was dried up because the local government at that time diverted the water from the river, driven by the same selfish motives. Another problem that occurred was when several of them were mauled by soldiers running after militants in the area, which he immediately mediated for good and aside from these man-made disaster; These indigenous groups were also affected by the series of typhoons and the latest was last May 2007 whereby almost majority of their nipa huts were destroyed, together with their area chapel which necessitated again for the painstaking efforts of coordinating and tapping concerned agencies of governance to help them rebuild their “resettlement” community.

After more than a decade, the Mudanza finally realized the seriousness of his degree of commitment which now entails a greater responsibility in securing the claim of these Aeta people to the land amidst the constant threat emanating from the municipal government with the intent of evicting them. The nominee knew full well that through this simple effort of organizing and mediating for them to good plight, he was able to “resettle” not just “relocate” a wandering group of indigenous Aetas. And by helping them establish a source of practical living coupled with an educational opportunity and security of tenure to their abode. These people would be prevented in becoming victims of criminal acts and more so indulge in petty thievery or the likes of criminal influences that they may not resist, especially when their families are unjustly treated and eventually impoverished by the unending sequence of helplessness and poverty.

On September 30, 2006, the nominee was able to solicit four thousand and five hundred twenty five pesos (Php 4,525.00) from the HAPAG ng PAMILYANG MINDOREtIO for the Aetas in Bansud during its landing by the Divine Savior Parish of Calapan City. Altogether thru his close association with members of the Couple for Christ in Roxas, Oriental Mindoro, he was assured by the Gawad Kalinga of a housing project befitting the Aeta community, once an agreement with the municipal officials was done.

Since 2006, Roy Mudanza assisted by Dr. Warren A Sarmiento, a Board Member of Sta. Lucia Health Care Center based at the ground floor of Sta. Lucia Department Store in Metro Manila put up a “booth center” nearby the information office of the clinic to scout donors and voluntary sponsors intended for the education and welfare of the Aeta community in Bansud, Oriental Mindoro.

Likewise on May 7, 2007 the Mudanza and his relatives distributed relief goods and piglets to the Aeta families, coupled with financial assistance amounting to fourteen thousand pesos (Php 14,000.00) to be used for buying a female carabao which they will utilize in tilling their lands. Significantly the nominee provides the school supplies and uniform of their children.

Thru the effort of Mudanza some of the children of the Aetas were granted scholarship. He also coordinated with the Faith Christian Church, sponsored by the Koreans organized school children to become choir members of the church ad later invited to go to Korea. 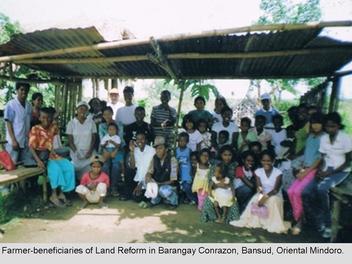 Sometime in June 2004, the nominee invited significant number of landless farmers and farm laborers of Bansud to a consultation in his residence in Brgy. Pag-asa, Bansud regarding a piece of agricultural land which could be the answer to their quest for land to till.

Mudanza realized that all his visitors are prospective applicants to the agrarian reform program of the Department of Agrarian Reform (DAR) in the province.

Roy Mudanza Lead-Organized the Assistance to the Fisherfolk of the Second District of Oriental, Mindoro in claiming the Rehabilitation Funds from Malampaya Gas Pipeline Project of Shell Philippines.

In the latter part of 2004, Roy Mudanza was approached by some of his friends along the coastal barangay of Bansud Proper, regarding their problem of declining income from fishing because of the damage caused on the fishing ground, directly or indirectly by the MALAMPAYA Gas Pipeline project.

They claimed that due to the heat and unusual sound generated from the pipeline the various species of fish abundant in the given habitat had been gone, thus the decreases in their fish catch. This situation prompted the fisherfolks to look for other sources of livelihood, but the alternative offer from the agriculture sector was already minimal due to the limited hectare of agri-lands potentials available to landless farmers, while almost all large tracts of agricultural land were solely owned by big landlords and agri-corporations in this municipality.

In one of Mudanza’s visit to this fishing village to buy some fish viands for family consumption, he suggested to his fisherfolk friends to approach the provincial government and explain their sad plight. Mudanza also encouraged them to form an association of the fisherfolks affected by the damages to the fishing grounds, in order to at least help them in their quest for alternative Income or livelihood.

Thus, the eleven (11) municipal chapters of Bukluran ng Lakas ng Mangingisda were established from Bansud to Bulalacao, five (5) of the seven towns in the 2 District of Mindoro within their first year of organizing and training, thereby funding the initial funds for their livelihood projects.

The following year they organized a district-wide fisherfolk federation that was permuted to set-up a cooperative worth One-Hundred Seventy Thousand Pesos (Php 170,000.00) as an operating capital last 2004 however, problems cropped up when the last tranche of (Php 70,000.00) that were due to them was stalled due to some unscrupulous quarter of some partner agency tasked by Shell Philippines to manage this rehabilitation funds, however, after some prodding of Mudanza to concerned erring agency, the remaining fund was given to them last October 22, 2006.

Despite such complications, Mudanza continuously encourages the members to search for other means of livelihood for them to stay away from the influence of illegal fishing or any criminal activity.